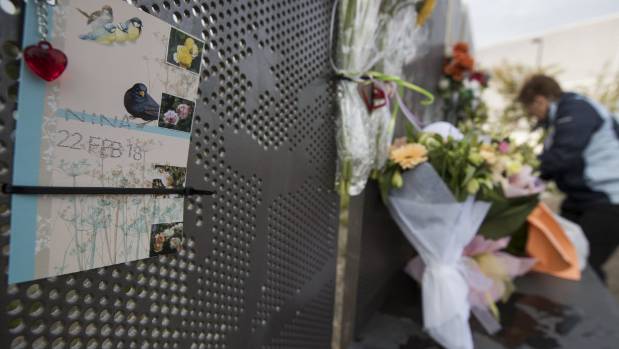 Memorials at the CTV site, where 115 people died in the building’s collapse on 22 February 2011. Credit: Joseph Johnson/Stuff

Today is an anniversary date in my life that I could live without.

Actually, it’s so bad that the other day Noel asked me, “Isn’t the anniversary of Grandpa’s passing about this time of year,” the day after that anniversary, and I felt guilty about forgetting that. (My Grandpa passed away on 19 February 2004.)

Last year, I spoke about feeling stuck, like 22 February 2011 is a fixed-point in my timeline, and, like a black hole, the rest of my life slowly spins around it, stuck in its gravity.

It’s weird, because it still feels that way, but I am comfortably numb with that. The human mind has an amazing ability to take horrible events and somehow make them seem surreal, like they happened so long ago that you question how well you can remember them and if they even happened to you at all. If I think back on that day without too much effort, there are vague broad strokes of what happened. But if I let myself really concentrate and remember, it all comes back very crystal clear: the sights, the sounds, the smells, the panic, the fear.

When I used to recall it — sit with the memory of those horrible moments and the aftermath — my flight or fight response would trigger. It felt somewhat like a panic attack but not as intense, and the feeling was like wanting to run nine million miles away from where I was, not only to burn the excess energy off but also to get away from those memories and those feelings.

My counselor and I were talking about fight or flight in our last session. Did you know there’s a third component to that scenario? Freeze. Fight, flight, or freeze.

Post-quakes, I am now a freeze. This, he told me, is very common for someone with depersonalization. It’s the default go-to for the body when confronted with anything dangerous, whether that danger is real or perceived.

After the first year or so of quakes, my body felt like it was starting to run low on the fight-or-flight juice. The intensity of each adrenaline rush waned until there wasn’t much left at all.

I chalked it down to my body getting used to the repeated injection of adrenaline, like a junkie, each challenge needing to be more intense to get the same level of rush. But it wasn’t a rush I wanted or needed.

But it wasn’t that, perhaps. Depersonalization may have started creeping into my life slowly and I hadn’t realized it.

So now, I’m at freeze. It’s not so much my body shuts down, but my rational mind does. I go into a robot-like mode where it feels like someone else is controlling me. My mouth moves, words come out, but I am not in control of them. It is a very difficult state to live in, and, sometimes, even things like someone talking to me, music being on, and me trying to concentrate on typing can trigger it. It’s like being unable to multitask any more.

Back to counselling: I was speaking to him about the earthquakes — and I don’t know if he was living in Christchurch at the time of the 2010-2011 quakes — but I used the word “violent” when talking about it.

He asked me what I meant about that.

It seemed a strange question to me, but I tried my best.

There was a violence to the 22 February 2011 quake. The shuddering both side-to-side and up-and-down, the deafening noise, things collapsing to the floor around us, the inability to stand or crouch or do much of anything, the being tossed around, those few moments of sheer terror and fear: the violence was overwhelming. It violated us. It violated me.

But there was no one to blame, I explained. The ground below us does not have a brain that we know of. Its actions are not a result of premeditation or impulse but mere naturally-occurring actions, my more rational mind added. In this case, we happened to be alive and in the wrong place at the wrong time to experience it. It was that simple.

Mirroring the events of now, the victims of the Stoneman Douglas High School shooting in Florida understand this feeling. They were going about their everyday business when someone came along and changed their lives forever in one act of violence. In their case, though, the survivors have someone to blame. They have someone to point their fingers at, to hate, to point all their rage and anger at until it burns out too and a sort of acceptance comes to their lives. For some people, maybe that acceptance never comes. But at least they have someone to blame, and that anger can be channelled into making positive changes in their school, their community, their state, their country to make sure mass shootings like this are severely curbed, if not stopped all together, in America.

The 22 February 2011 quake, like the mass shooting at Stoneman Douglas, was an act of violence. Those of us who experienced it will not be the same again. We changed, and will continue to change, because of what happened in such a minuscule space of time. Some of us will stay stuck. Some of us will change our lives. Some of us will be unable to face it.

The quake happened, and I happened to experience it. The optimist in me keeps reminding me that it could have been a lot worse for me, for many of us. Reading an article somewhere that came out after the quake, the majority of us were lucky to survive, as the acceleration would have been enough to almost completely destroy many other cities — and from memory, it stated our death toll could have been 50,000+ — but New Zealand’s strict building codes saved many, many lives. That’s both a humbling thing and a frightening thing to read. Even typing it makes me anxious, that “what if?” part of my brain taking over.

So, on this seventh anniversary of that terrible day, I feel numb, almost emotionally tired. It will pass with time; I have to have faith it will. The depersonalization is not as bad as it was when it started, but it is worse than when I felt I was on the winning side of recovery. But, with a ex-tropical cyclone and a reconsideration review for our NZQA External Evaluation and Review plus all the other work I have on at work, I kinda have to expect that this anniversary would trigger numbness.